(Writer’s Note: We wanted to do something a little different for once. We wanted to open up and acknowledge and give credit to something that inspired us from an unlikely place as a child. We are using some humor in this blog, we are going outside of the box on this one, but we are doing it because we believe you will enjoy it. We will be back to talking horticulture soon, but we also want to do some fun every so often. This is one of those blogs so please enjoy!)

“In a time long long ago, in a town that was pleasant before it try turned into plastic, there lived a young man. This young man was born in the era of the end of Gen X and before the Millennial, the Xenillennial Era as they call it today ( I call it Generation Lawn Darts). It was a time period where afternoon cartoons helped mom’s get things ready for dinner, be it real American heros, a man who harness the power of Castle Grayskull, or by robots that transformed. Friday night’s consisted again of period of rest and relaxation for the parents, as their was some good ol boys in a car from Georgia, a car that talked, a helicopter that growled, and who could forget the “soldiers of fortunate,” on the run in that black van with a red spoiler. The Saturday mornings apparently were filled with cartoonish violence, so violent that by today’s standards cannot be shown on television. Still while rhyming and singing songs with a big yellow bird on a particular street, dancing around to a vampire with a number fixation, or wondering why anyone would want to live in a trash can, these moments would be topped by one show, that stole the show, so much it left a deep lasting imprinted.”

So have you figured out the show yet? I will give you a few clues, it wasn’t the Carebears, My Little Pony, or Strawberry Shortcake. If you guessed “Fraggle Rock,” you got extremely close to something that the show has in common. It was a variety show for kids. No, it isn’t Pee-Wee’s Playhouse. Think about SNL for kids. Still drawing a blank? Ok that is fine, it was the Muppet Show by Jim Henson, Henson produced both the Muppet Show and Fraggle Rock, and I was fortunate enough to see both.

If you grew up then and didn’t appreciate the Muppets Show, man, that must of hurt. You probably thought I was going to say something like, “Mr. Wizard.” I liked Mr Wizard, it was one of the three shows on the fledgling Nickelodeon channel I would watch along with “Pinwheel” and “You can’t do that on television.” If at this point if you are having some serious 80’s flashbacks, it is fine and normal, but lets’ get back the show of shows, The Muppet Show.

So you are probably wondering how in the world did the Muppet Show leave a strong lasting impression about science in me. It wasn’t the “Pigs in Space” skits, it wasn’t the Swedish Chef creating a food chemistry curiosity, nor was the physics of Gonzo being shot out of a cannon, nope, nope, nope. I will say it took a long time for me to figure out why I like Elton John as an adult. The lasting impression of science, that deep seed was planted by…………………………. 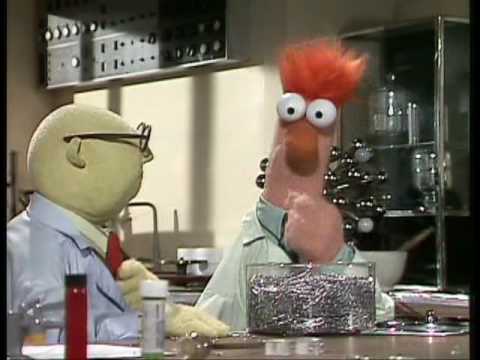 Dr. Bunsen Honeydew and of course his faithful and loyal assistant Beaker. While many of Dr. Honeydew’s experiments did not ever see the light outside of Muppet Labs, it was these skits, that got me, “excited about science.” It took me a long time to come to terms of how puppeteer art actually inspired scientific thinking in me. Then again, there is quite a few people think that a war wages on between the arts and sciences. No, Dr Honeydew never had a skit that explained scientific principle, that was Mr. Wizard’s gig, but every time poor old Beaker had to test out the product, you knew something bad but funny was going to happen. Even in the later episodes, a reluctant Beaker, refusing to help Dr Honeydew, was comical before anything happened.

I am really surprised that Disney, the parent owner of Jim Henson’s property, hasn’t cashed in on making lab safety training videos, I guess in one way they pioneered it in these skits.

What I do know is that Disney hasn’t forgotten about either of our crusaders of science.

And if you wanted to pay the duo a visit in person, you can with a trip to Epcot.

Today we hear a lot about STEM programs to get kids interested in science, technology, engineering and math. To me it looked like Jim Henson actually created that curiosity when he created this two. To me it is also like they could bring back Dr Bunson Honeydew and Beaker and develop a curriculum covering those areas (I guess “The Count” from Sesame Street could make a cameo for the math) that spans the ages, at least through K-5th grade. Sure there is Bill Nye the science guy, but he is nothing more than a really cool Mr. Wizard. Anyways, so the cat is out of the bag, it was those two muppets that actually got me hooked on science. I can remember thinking,”one day Dr Bunsen is going to invent something that works.” All I can say now is what I said then,”keep trying Dr Honeydew.”

So I am going to leave this blog with my favorite (at least part of my favorite) Elton John song……..take care and until next time, “Grow Forward.”