As we closed out February 2020 and are blessed with an extra day, I want to touch on a few things that we have been working on since the beginning of the year.

I decide since last year was an irregular winter/spring transition, (we had a week’s worth of 80 F’s degree days), that I wanted to experiment with starting the propagation process as early as possible this year.  Yes I would normally wait until just before the  Vernal equinox to conduct vegetative propagation of some evergreen species of plants. Yet with last’s irregular green up and leafing out then cool down, we were behind on getting propagation done using our recycle soda bottles as high humidity domes. 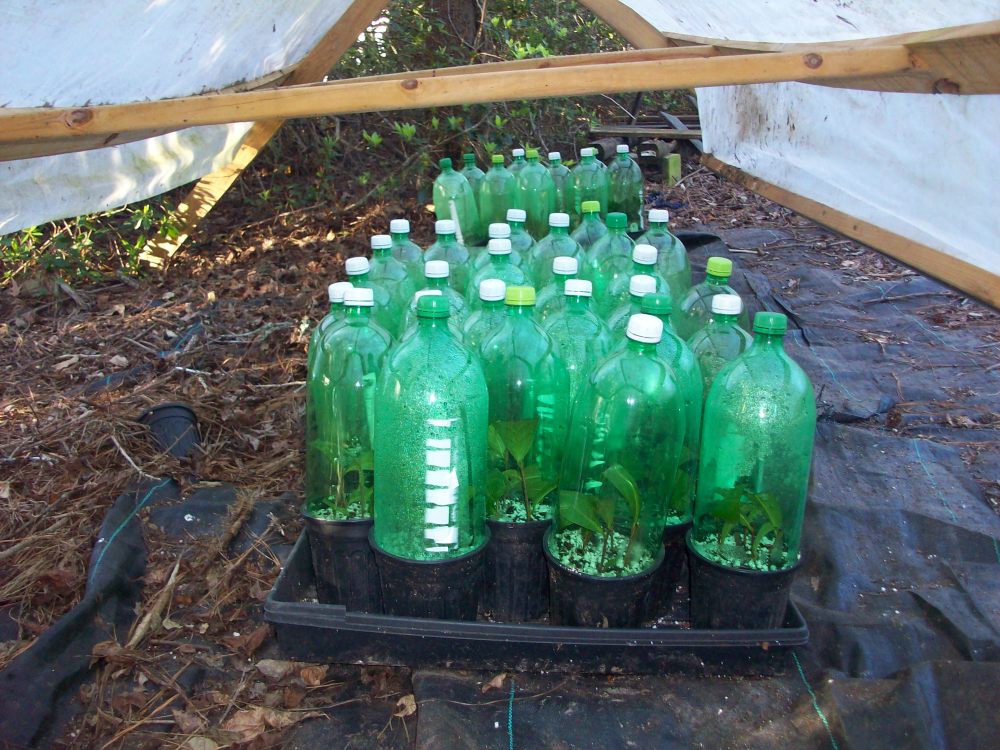 Plus last year propagation struggles delayed us on working on getting our “Vada Rose” bottlebrush stock plant numbers up, so that we can have healthy liner production in the future, once we file for the patent and maximize the term of the patent to collect royalties. As of right now, our propagation hut is at 50% capacity. 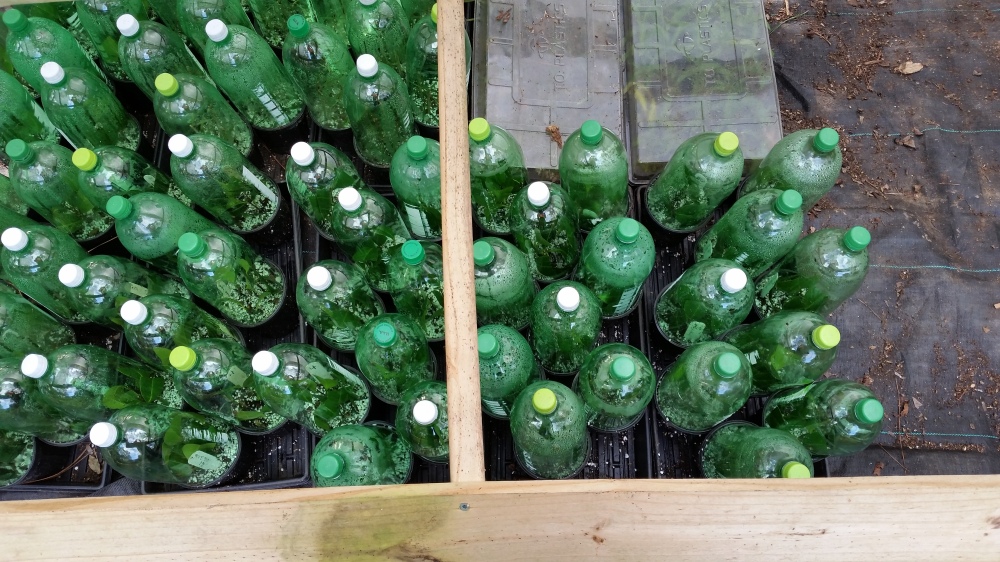 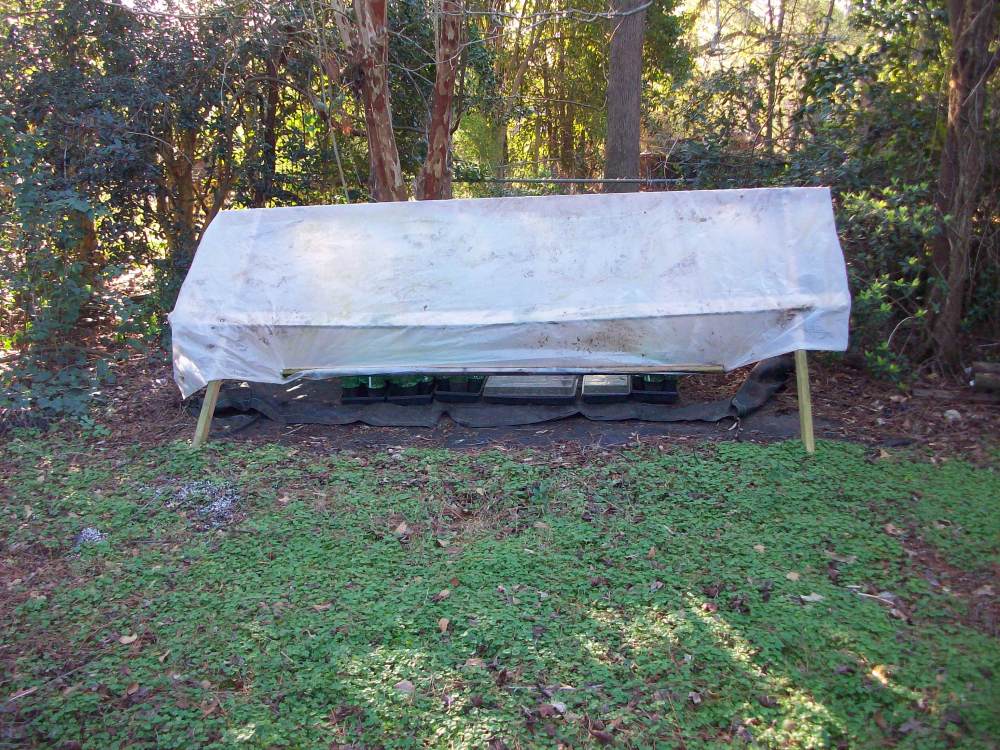 We also discovered that apparently there is also a huge hole in liner production within the horticulture industry and that in the near future there will be bottlenecks of availability of plants to consumers. This is something will want to avoid. Will we have to supply all the liners for nurseries to grow in the future, we truly hope not, yet if that is what it is going take to get the return on our investment in product development, then so be it.

So what have we propagated so far this winter? Well there is four main groupings of materials. Of course we had to propagate some Camellia sinensis AHHS #4, AHHS #5, and Clone 2. For those of you that don’t know, Clone 2 is a selection that was made long ago out at the Lipton tea research station on Wadmalaw Island. It was the second clone selected out of the first three fields planted that came from the Clemson-Lipton Pinehurst project. Why it didn’t become the major clone to used in the southeast, I have no clue. How did I get it? Well that is a very simple and easy answer, Mack Fleming’s family. After Mack Fleming died, his family decide to give away a bunch of camellia plants that Mack had propagated. He got the cutting wood back when he still owned part of the tea farm. And yes, as a former student of his, we propagated Clone 2 and several other clones before the tea farm sold to the Bigelow family during a court auction. So if in about 7 years from now, there seems to be a lot of a very good to excellent orthodox tea popping up in and around Charleston, more than likely it is Clone 2. Now I have warned several other people whom I know that received Clone 2 about propagating and selling the plants. Not because I am being selfish, if anything, to help them avoid and situations with attorneys. I will never sell it or hand it out for that reason and also Mack would want me to not make the most of his family’s generous offer in his memory.

Of course, there is a handful of Camellia japonicas in the hut as well. A few came from the Coastal Carolina Camellia Show. I just checked out those to day and while I have lost most of them, there is several still hanging in there, (Purple Swirl and a Georgia’s National Fair). Then there is a variety of selections I made out of what is left from the Old Fort Nursery later known as Higdon’s Garden and Nursery, which is about three to four blocks from my house. In the last two to three years, the site of the former nursery has been slowly developed into a small but super dense neighborhood. It is really a shame I didn’t go in there before the development start and made air layers. I did do some propagation and have a handful of survivors. Still there is a very small piece of the old site with camellias on it, protected. I took some cuttings this year, and might try to get more in a coming weeks. Plus I can go there next year and gather more cultivars. I could of sworn I have seen “Blue Coral Sea” there, beautiful japanese single red with deep blue to purple hue tones. 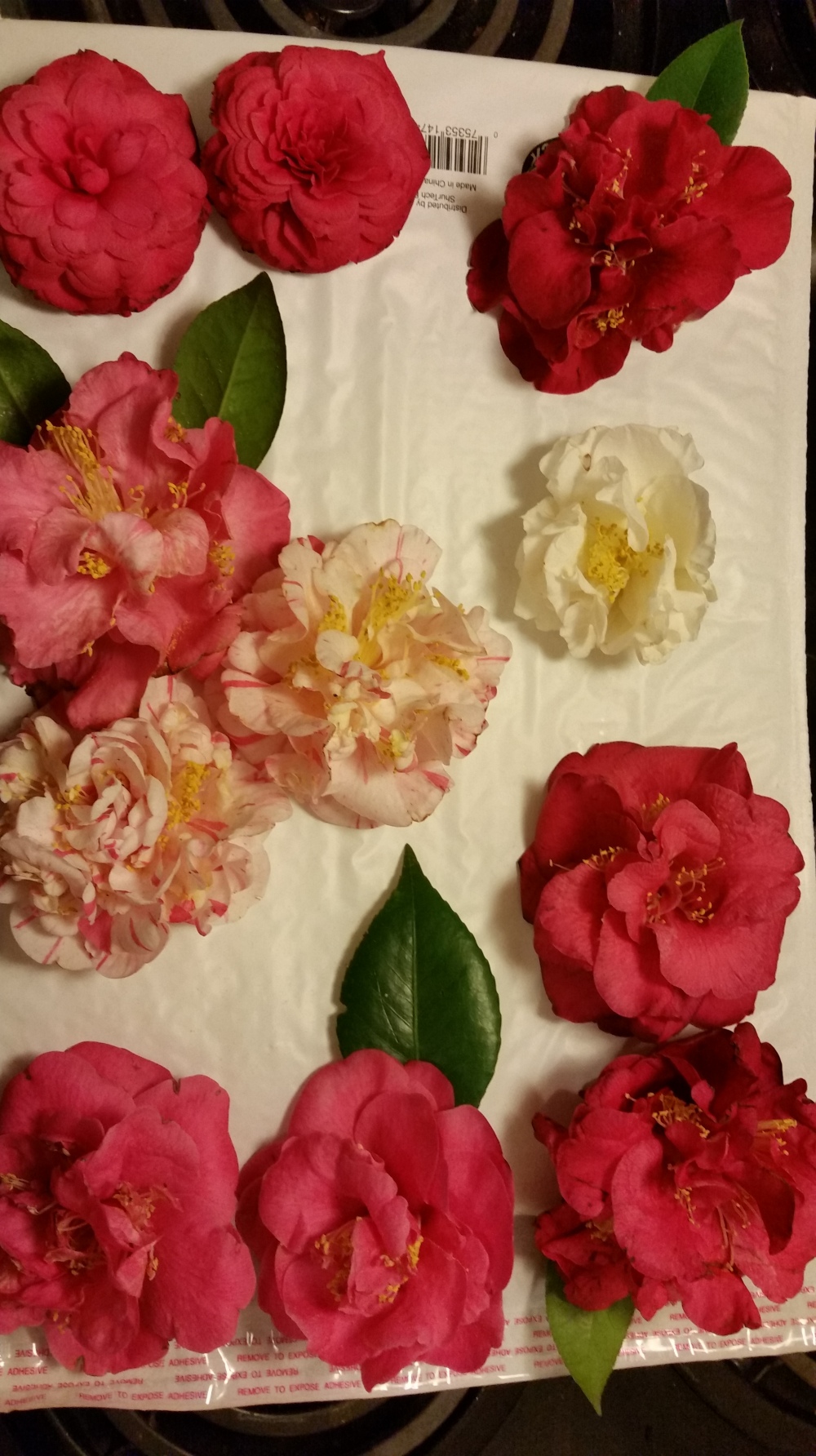 So here is a picture of this year’s cultivar acquisition from Higdon/Old Fort Nursery. I know two of there names for sure and suspect two other names, which leaves me with without two names, but regardless named or not, there is some excellent breeding stock with these flowers.

The upper left cultivar looks a lot like “Prince Eugene Napoleon,” yet it has twice the number of imbracated petals. I have seen it at the flower show so and maybe I have it some where in my pictures, “Conte Bouturlin”. The upper right cultivar, I have no clue, but I will continue my search. Both of the middle cultivars, I do know, the one on the right is “Melissa Ann,” several people have confirmed this. The middle left one got a lot of, “that is real pretty, I have no clue, but the judges should love it.” Well let’s just say I spent more time than I should trying to find a name, but I found the name and about a week later someone posted the same flowers to a facebook group and I was able to give them a name. The irony is that it is not registered in the So Cal Nomenclature book, but I found the pink version of the flower on the Atlantic Coast Camellia Society library, unfortunately their variegated picture is a picture of a pink flower with virus variegated and not the white and pink candy stripe. The middle left is “Marchioness of Exeter,” a beautiful import from Belgium around 1850’s. I am pretty sure the bottom left is “Marie Bracey,” yet the large beautiful red in the lower right hand corner, is unknown, for now. Could they be very big “Kramer’s Supreme”, it is possible yet my gut is telling me something older, (could it be “Cardinal Richelieu”?). 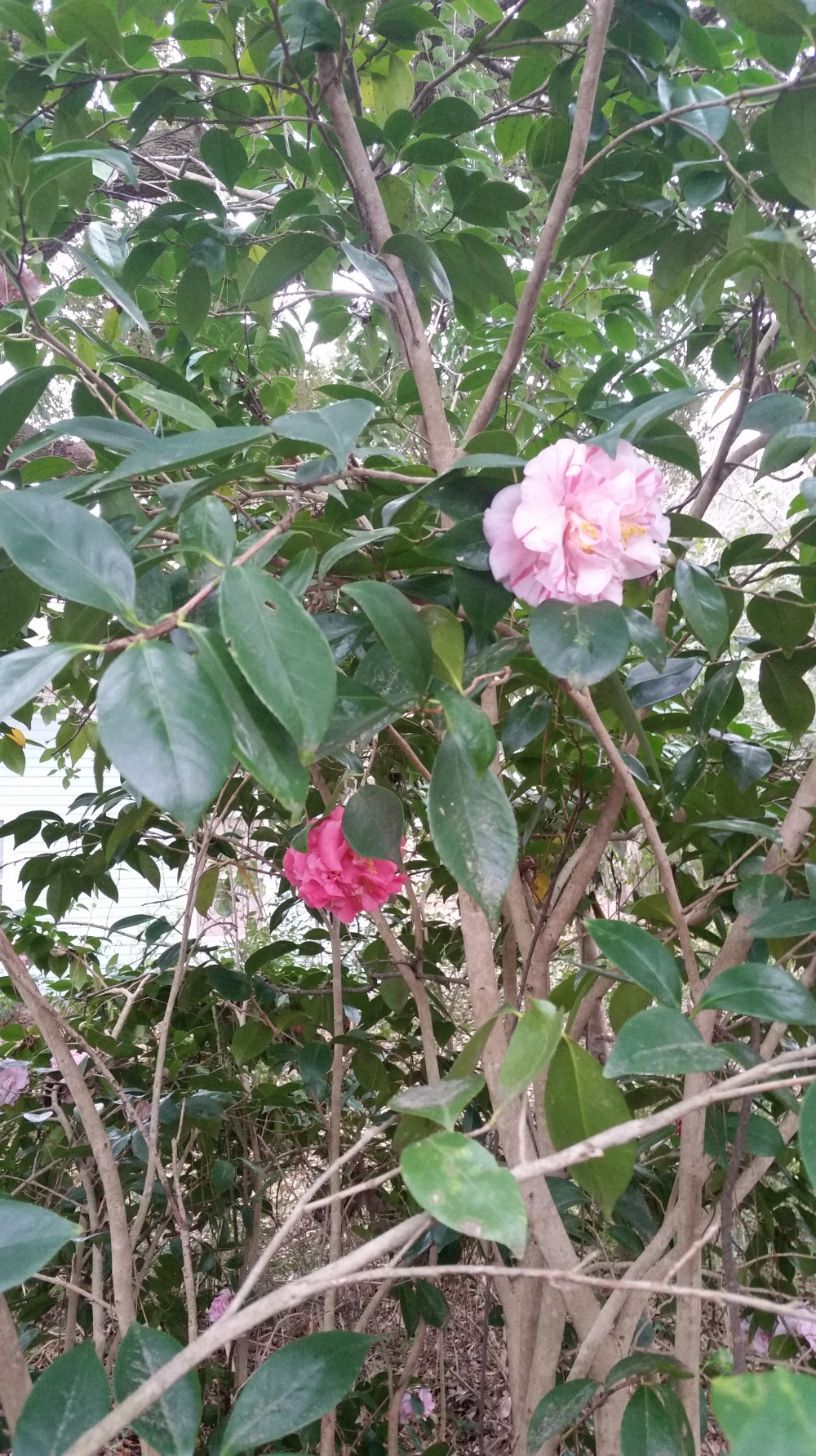 So what is the big deal about “Marchioness of Exeter?” Well the rarity of its’ cultivation. I am not saying that is like an endangered species, but from what I can tell it is commercially extinct. It was once offered in the 1940’s under a synonym of “Marquis of Exeter,” by Magnolia Gardens and Nursery. It has huge beautiful blooms which could make for some great breeding stock. I just hope to get several rooted this year and grown off before next winter. 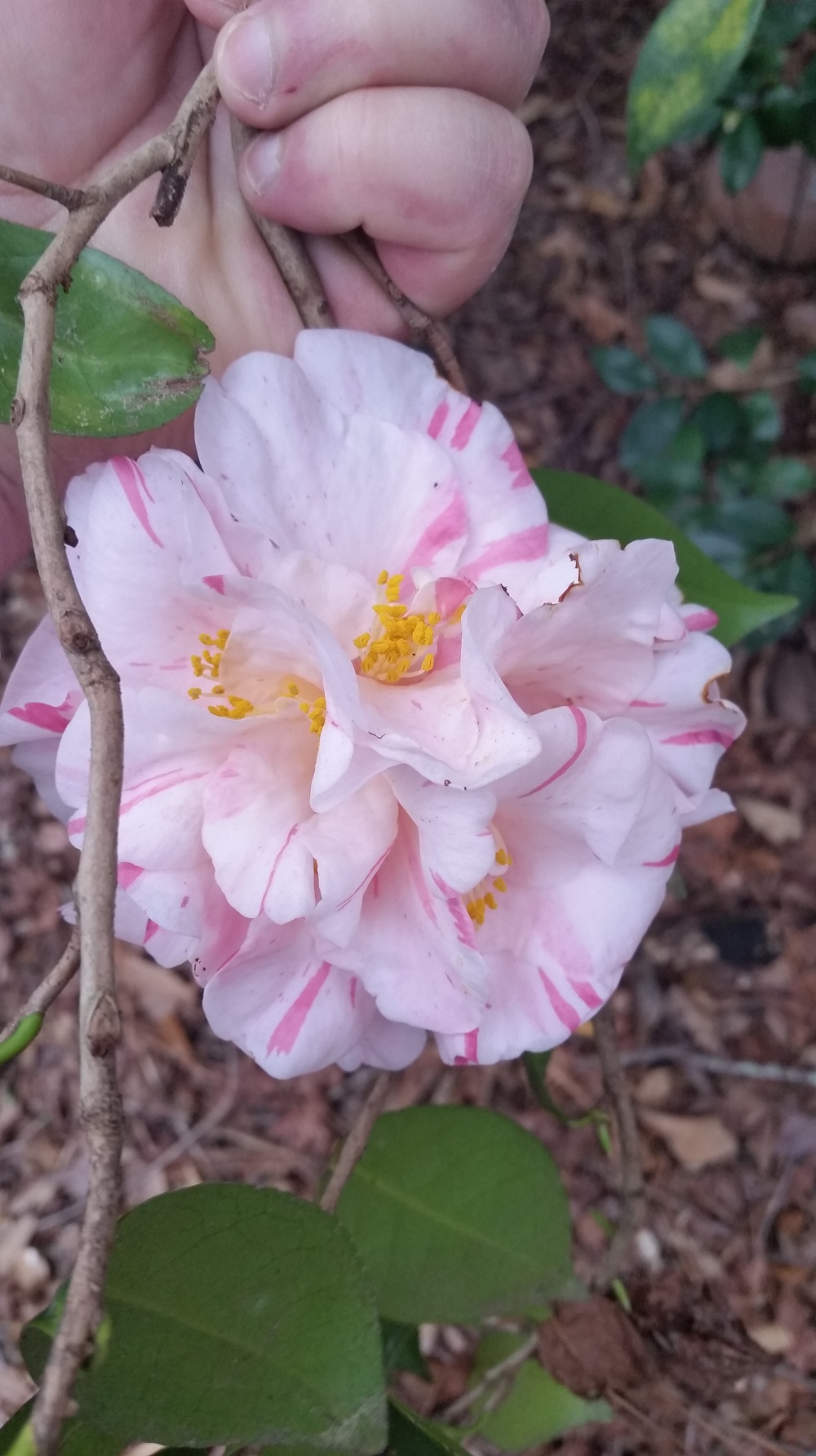 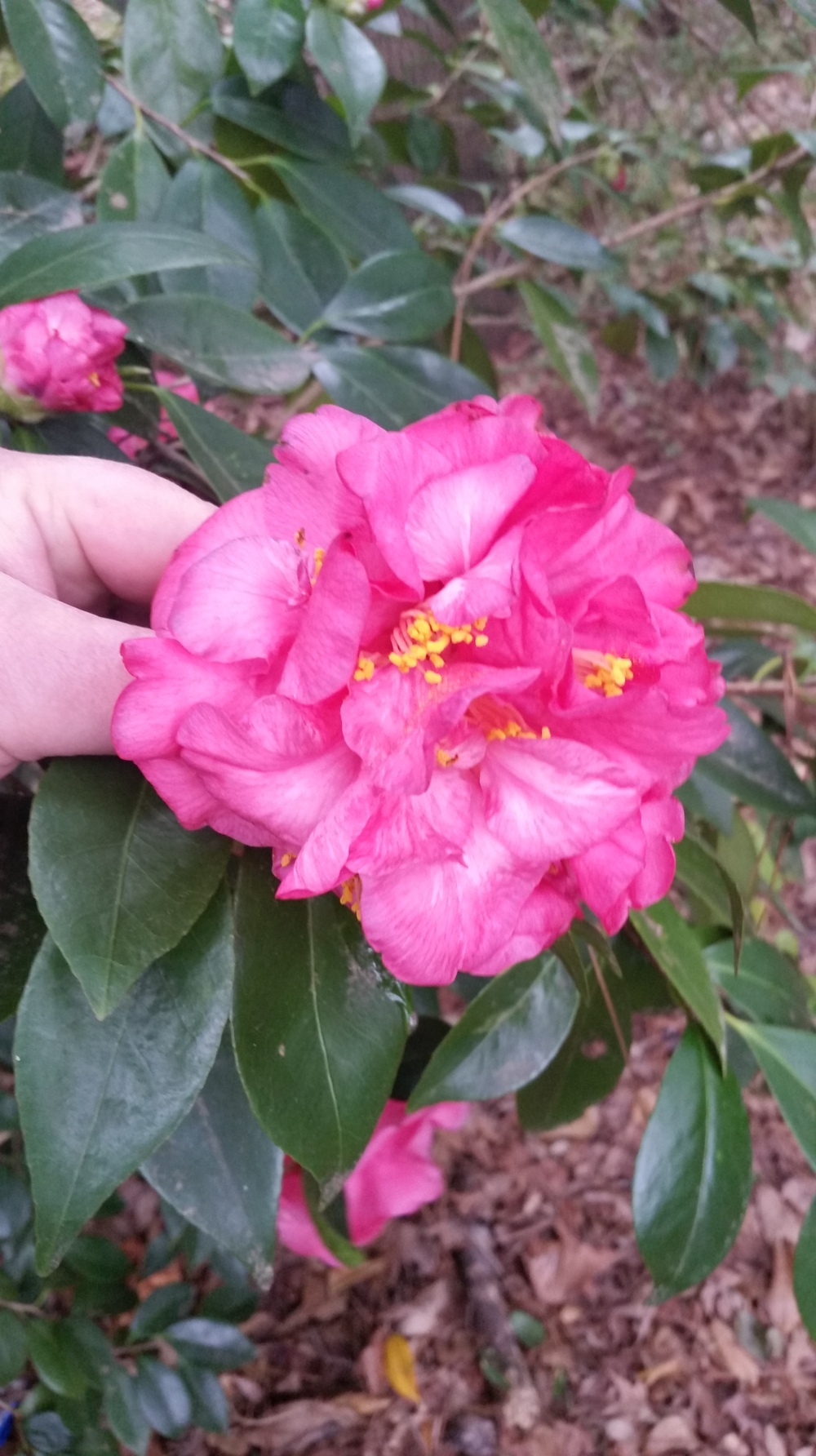 Seeing that we propagated some of these in late January and early Feb and our temperatures during the day and night between 70 F and 45 F, we are guessing by mid April we will see roots formed. We will more than likely make one more round of cuttings this week with various Camellia japonicas and sinensis, then we start moving onto getting ready to sow tea seeds and other forms of propagation, not completely ruling out a set of single node cuttings in April, but with limited space in the propagation hut, we have to move forward.

We have a relatively decent winter but Spring is coming as the Azaleas are in full bloom right now and the dogwoods are starting to peak out. This blog will also start to pick up more as well. We hope you enjoyed this entry and hope that you come back for more, but most important we hope this has helped you to “Grow Forward!”

Until next time, take care and be safe my friends!